Distributed Denial of Service (DDoS) attacks are more devastating than ever. The new normal for DDoS attacks, according to security researchers, is 200-400 Gbps of traffic -- hundreds of times the bandwidth of typical web sites. SecureSphere Web Application Firewall stops application-layer DDoS attacks, but these massive DDoS attacks saturate your Internet pipe, preventing valid traffic from ever reaching your network.

DDoS Protection Service for SecureSphere, an add-on subscription for Imperva SecureSphere customers that is powered by Incapsula, blocks DDoS attack traffic in the cloud--before that traffic can take down your business and your brand.

Imperva offers flexible 1, 2 and 3-year standby and automatic service plans to meet specific business needs. The standby plan can be enabled when under attack. The automatic plan is a continuous service that can be purchased in conjunction with the Imperva Cloud WAF service.


DDoS Attacks Can Be Devastating

DDoS attacks have become the weapon of choice of cybercriminals, hacktivists, and nation-states because they are inexpensive to perform and difficult to stop. For $50, a malicious user can rent a botnet to launch an attack on the Website of their choosing. But the impact on the targeted organization is much more expensive, costing businesses $27 million on average for a 24-hour outage.

To circumvent network defenses, an increasing number of DDoS attacks target Web applications and application databases. These DDoS attacks mimic regular Web traffic and they initiate requests too slowly to be detected by traditional firewalls. For example, hundreds of bots might perform online searches to cripple a website's back-end database, taking the site offline. Application DDoS attacks often fly under the radar of traditional network-based defenses, resulting in hours, days or weeks of downtime.

With DDoS Protection Service for SecureSphere, customers can rest assured that their applications are always accessible without needing to over-provision Internet bandwidth.

DDoS Protection Service for SecureSphere can detect automated clients based on behavior and user agent information. It can recognize when a bot claims to be wellknown browser, but deviates from expected browser behavior. It can spot HTTP requests that are too fast, mismatched user agent data, and other attributes that expose bots. And it can issue a series of challenges, starting with JavaScript checks and ultimately concluding with CAPTCHAs to correctly stop automated DDoS clients without blocking legitimate users. 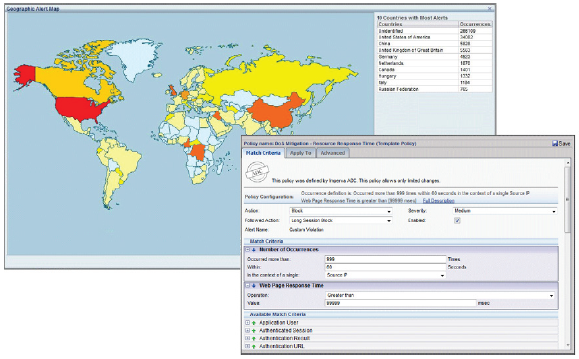 While automated defenses can stop most DDoS attacks, they cannot mitigate all attacks, especially application-layer assaults that exploit business logic flaws. Advanced attacks can target specific weaknesses in an application and evade standard DDoS defenses. Detecting and stopping anomalies, such as repeated user login attempts that slow down a database or millions of requests from an obscure country, requires monitoring and tuning by security professionals. 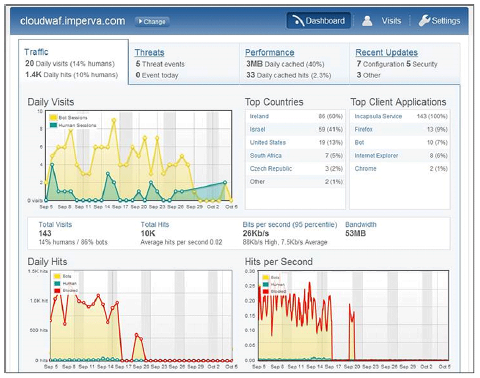 Organizations can rely on Imperva's cloud and on-premise security solutions to stop powerful DDoS attacks. DDoS Protection Service for SecureSphere, a simple add-on subscription for SecureSphere customers, provides ironclad protection against application and network DDoS attacks. With a global network of datacenters and an advanced bot mitigation engine that correctly identifies and stops bots, this security service fends off the most complex DDoS attacks. The SecureSphere Web Application Firewall offers granular policy control and detailed alerting and reporting to ensure applications are always available and responsive.

DDoS Protection Service for SecureSphere can be rolled out without any hardware, software or Web application changes. When customers are under attack, they simply change their Website's DNS settings. This effortless deployment allows customers to be protected in a matter of minutes while maintaining their existing hosting provider and application infrastructure. 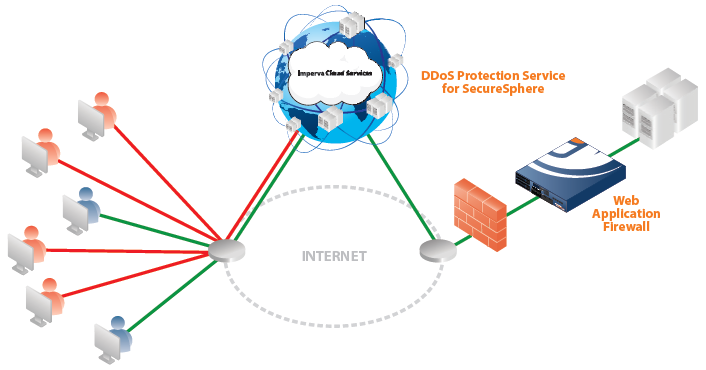 
1 Eliminating unnecessary application code such as white spaces and comments.
2 The Imperva DDoS Protection Service can detect and block the following DDoS threats. Note that DDoS Protection proxies Web requests, so any network layer DDoS attacks would target the cloud infrastructure and would never be relayed to the client network. Therefore, DDoS Protection will prevent all network DDoS attacks.